The crisp months of March and April often bring with them the first signs of spring. As the sunlight shines longer, many people breathe easier, smile more often, and shed their jackets of seasonal depression. Dancers, however, scour the internet for opportunities; it is audition season. These opportunities can often be found in the sports industry. Whether it be baseball, basketball, or football, many professional teams use dancers to entertain their crowds at live games. Because of the many perks, these opportunities attract dancers from all backgrounds; they are fun, prestigious, and can guarantee future work in the entertainment industry. Unfortunately, though, these jobs aren’t all sunshine and rainbows. For these public performers, threatening storm clouds are rising beyond the seemingly clear horizon.

In the spring of 2018, Samantha had just finished studying at a famous dance school in New York City and was itching to establish herself as a professional dancer. When she found an open call seeking dancers for a local minor league baseball team, she knew she couldn’t let the opportunity slip through her fingers. At the audition, Samantha was instantly dazzled. The baseball field was on the beach next to a boardwalk with exciting rides, popular games, and the scent of popcorn around every corner. Samantha slowly but surely made it through the audition process. Between the first and second rounds, she made friends with two other dancers, Lauren and Kristen. By the third round, Samantha, Kristen, and Lauren had not only bonded, but made it to the shortlist for the team. Finally, after what felt like hours of waiting, the coach read out the dancers who had been hired, naming Samantha, Lauren, and Kristen among them. Samantha couldn’t believe it; she was thrilled. Beyond this excitement, though, stormy clouds gained on Samantha’s sunny skies. She didn’t know it at the time, but she had just stepped foot into an adult world containing horrors she once thought to be only in history books.

Samantha’s favorite part of her new job quickly became interacting with the fans. On any typical day, she started her shift by handing out brochures at the field entrance. Once the game began, Samantha was sent to the audience. The dance team had a reputation for taking pictures with fans and signing autographs, which was exactly what Samantha loved, despite the fact that most of them were 12-year-old boys. It was sweet, wholesome fun. However, there were aspects of her job that Samantha didn’t love, most notably interacting with the team’s super-fans. The captains encouraged the dancers to interact with every fan, despite any red flags. These were often found in the super-fans, many of whom were older men attending the games alone. Samantha smiled her way through these overtly creepy interactions on a daily basis. She was uncomfortable with them, as were Kristen and Lauren, but she had a job to do. They were just bumps in the otherwise smooth road to success, that was until Samantha met super-fan Andrew.

Andrew initially presented himself as a harmless, albeit still weird, fan. Many of the girls on the team knew of him by mid-season because of how often he was around, chatting casually to each girl as if he was a friend of the group. He knew every girl’s name, which eventually prompted him to follow them on social media. Samantha, Kristen, and Lauren accepted his friend requests, as they were instructed to do so with any fan, and Andrew quickly made himself a prominent presence on the girl’s pages, liking and commenting on every post. It was harmless, until it wasn’t. After a few games, Andrew direct-messaged Samantha. She had left that day’s game early because of a family party, and once she saw the notification on her phone, her stomach dropped. The storm that wasn’t even on her radar was suddenly right on top of her. “I know you left early,” said Andrew’s message. She answered him with a polite but vague response, remaining professional but establishing a boundary. As the days went on, Andrew’s messages came more frequently. He asked a lot of questions, such as “How long is your commute?” “Do you want my cell number?” and “When are you working?” As Samantha became more uncomfortable, she discussed the situation with her parents and her friends. Lauren and Kristen had also been receiving the unnerving messages. Together, the girls decided to ignore Andrew, but his messages still came. “Is everything okay?” he asked, followed by “Do you have a minute to chat?” Samantha, Lauren, and Kristen then approached the team captain, who stepped in to talk to Andrew, encouraging him to stop bothering the girls. Andrew wasn’t deterred, though. “I’m flattered by the locker-room chatter about me,” he messaged Samantha a few days later. She felt nauseous and ignored him, as she had been for weeks at that point. Andrew wouldn’t let this pass peacefully, it seemed, and he sent Samantha another message. “Be careful what you say because if your coach gets wind of our conversations, you’ll be in just as much trouble as me,” he lied, attempting to manipulate her into thinking she had also done something wrong. This message was the breaking point for not only Samantha, but also for Lauren and Kristen, both of whom got the same message. Once the team captain saw this, she approached their coach, fearing Andrew would confront the girls in person. The coach reacted promptly and banned Andrew from the field at the next game. Finally, the girls could breathe easier, blocking Andrew on each of their social media pages immediately. Samantha, Kristen, and Lauren finished out the season safely, though they wished they’d never entertained Andrew in the first place.

Today, Samantha’s sunny skies have returned. However, she now knows the threat of a storm is always there. She is no longer naïve to the possible horrors of the adult world. She, Kristen, and Lauren now see Andrew as exactly what he was: a stalker capable of inflicting real harm. Because of her experience, she is aware of the initial signs of trouble. Samantha is always weary of creepy individuals now, but she doesn’t let them get in the way of living her life or doing her job. She has found a balance to maintain both her personal safety and her success in the dance industry, which is to simply keep her guard up. In the grand scheme of things, Samantha supposes doing so is a small price to pay for such a valuable reward.

Word on the Web Action Plan: 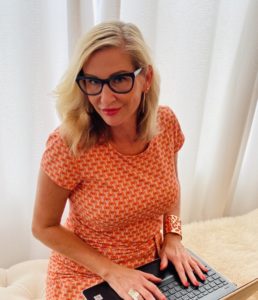